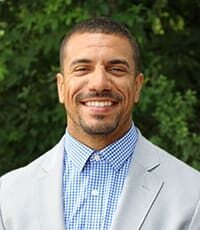 Kurt Coleman currently serves as the Stewardship and Scholarship Administrator at Charlotte Latin where he is working to create enrichment opportunities for students on campus and also treats the onboarding experiences for new families and students. Charlotte Latin has over 16 different scholarships that Kurt oversees and works directly with the Admissions team in his role as Kindergarten counselor. He and his wife Laura have four children, three of them currently attending Latin.

Previously, Kurt played 10 years in the NFL most notably with the Carolina Panthers. He received his bachelor’s degree in Exercise Science at The Ohio State University where he captained the Buckeyes and was an All-American. Kurt co-founded Uplifting Athletes at Ohio State, a non-profit that raises awareness for rare diseases. Kurt and his father, Ron, founded Coleman4ACure, the Coleman family foundation that focuses on supporting families battling cancer.

Kurt recently retired from professional football and now enjoys giving back to the Charlotte community. He has partnered with The American Cancer Society and Carolina Breast friends to help bring awareness and raise funds for research and cancer support.