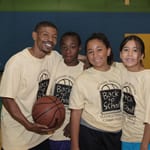 The QCAA 8th Grade team, coached by QCAA president Ed Addie, will play under a new umbrella in 2014. The team will be part of the new Reebok MB1 program, which is part of the Always Believe Foundation, Inc.

MB1 is the brainchild of former NBA star Muggsy Bogues, who also created the Always Believe Foundation, which seeks to promote health and self-belief among young people in communities.

“This is something I’ve been interested in doing for a long time,” Bogues said. “I’m very pleased to have a partner in the Reebok brand, which will help make this dream a reality. I’ve been involved with Reebok for more than 20 years, and it’s good to rekindle that relationship now.”

The 16U/17U MB1 team was formerly called Team F.A.S.T. It will be coached by Marcus Allen, Gary Gadsden and Kevin Ligon.

That organization was founded by Allen and Gadsden. Team F.A.S.T won the Bob Gibbons Tournament of Champions 17U division last season and had strong showings at several other showcase events. Gadsden currently is an assistant coach under Bogues at United Faith Christian School. United Faith switched from Under Armour to Reebok this season.

“We’re looking forward to getting out into all the surrounding areas outside of Charlotte to assemble a great travel team,” Gadsden said.

The 14U team, coached by Addie, will be a rare 8th grade team with a true travel arrangement. As 7th graders, Addie’s team won 13 tournaments, the program’s fifth national championship at the United States Basketball event in Myrtle Beach and more than 60 games overall.

“I’m just thrilled that we were able to put this together with Muggsy,” said Addie, who also coaches at United Faith. “This deal will allow us to keep what I feel is a very talented team together long term and hopefully to attract more players to our QCAA organization and, as they get older, into MB1. Best of all, our kids will get to benefit from Muggsy’s experience and wisdom.”

Bogues’ high school teams at Dunbar (MD) were undefeated in his junior and senior seasons and ranked No. 1 nationally. In college at Wake Forest, Bogues became a top 50 all-time ACC player — along with players like Tim Duncan and Michael Jordan — and eventually had his No. 14 jersey retired.

After college, Bogues won a gold medal with the USA national team and was drafted No. 12 overall by the then Washington Bullets.

Today, Bogues intends the MB1 basketball teams to be a gateway into other areas that his non-profit foundation will touch, including education and social responsiblity. Bogues plans to offer SAT tutorials and education, general tutoring and sponsor special college tours when the teams are traveling to out-of-town tournaments.

MB1 will also host camps and clinics, including a citywide 3-on-3 event and a overnight point guard camp in Charlotte.

Addie thinks this partnership with MB1 and Reebok will bring a lot of benefit to QCAA and the community.

“Muggsy has some big plans and I really think he’s going to pull through on all of them,” Addie said. “We can’t wait to get started. This is a great day for QCAA and I can’t wait to see this thing grow.”

Posted in News
Scroll To Top